If you love asparagus and want to grow some yourself, waste no time in getting started. Even with the best of care, an asparagus bed won't hit its stride for several years. But once that happens, the bed will produce an abundant crop of spears spring after spring for at least the next 20 to 30 years.

In the old days, gardeners were told to prepare an asparagus bed by digging an 18" deep trench and then backfilling it with a mix of compost and soil. Thanks to plant breeders at Rutgers University in New Jersey and elsewhere, today's improved varieties of asparagus are less work to plant (6" to 12" deep is adequate) and produce almost twice as many spears per plant. The production increases are due to the fact that these hybrids are all-male cultivars, so no energy is wasted producing seeds. They also don't produce baby asparagus plants, which can compete for space and nutrients. So forget about Martha Washington and the old asparagus varieties. Most of the new varieties are also resistant to two common asparagus diseases: fusarium rot and asparagus rust.

Before planting a new asparagus bed, it's critical to eradicate all the weeds and grasses from the planting area — even if this requires a full year of advance preparation. Asparagus plants will not tolerate weed competition. Even though asparagus can sometimes be spotted growing in a ditch among thick grass, the domesticated varieties won't survive. No grasses, no weeds. Period.

Asparagus crowns are usually available just once a year in early spring. So plan accordingly. Once the bed is weed-free, dig a trench about 12" deep and a foot wide. The crowns should be planted at 18" intervals in the bed, so put a shovel of compost and a cup of all-purpose, organic fertilizer in the trench every 18". Rock phosphate, a natural mineral powder, is another good addition. Phosphorus, which promotes strong root growth, doesn't move through the soil as easily as other nutrients. You only get one opportunity to fortify the root zone, so don't miss your chance.

Mix the compost and fertilizer with some garden soil and shape it into a little mound. Set the asparagus crown on top and drape the roots down around the sides. The top of the crown should be approximately 6" below the soil surface. Cover the roots with garden soil right up to the crown and water well. As shoots begin to appear, add more soil until the trench has been filled back up, level with the soil surface.

If grasses or other perennial weeds get established in an asparagus bed it is almost impossible to reclaim the planting. So keep your asparagus bed well-mulched from the start, using shredded leaves or straw. For the first couple years, weed often and carefully — asparagus roots are near the surface and can be damaged by weeding tools. Don't interplant other vegetables in the same bed. Asparagus hates competition of any kind.

Originally asparagus grew in swamps and wet places, so maintaining consistent soil moisture is important for good production. You may wish to install drip-irrigation or a soaker hose if you live in a dry region. Watering is especially important during the first three to five years of growth. 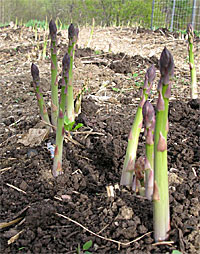 An asparagus bed during the third week of the season. Read more in our blog post: Please Pass the Asparagus 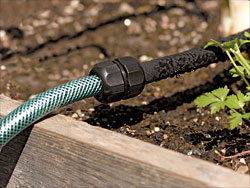 The Snip-n-Drip watering system can be customized to fit any asparagus bed — including raised beds.

To keep your asparagus bed productive, don't be greedy. The first year after planting, you can harvest a few spears from each plant. Pick for about two weeks and then stop so the fronds can unfold and begin feeding the root system. Harvest for three weeks the next year, and four to six weeks after that. Pick too much, and your plants will not be able to develop the strong root system and energy reserves they'll need to produce an abundant crop of spears the following season.

The diameter of the spear has no bearing on quality. Spears should be harvested when they are 5" to 7" high and before the tips begin to loosen. Once the tips loosen, the spears become tough and fibrous. To harvest spears, cut or snap them off just above the soil level. Leaving a stub causes no harm to the plant. Once the bed is well-established, harvesting can continue until the bed yields only skinny spears that are less than a half inch in diameter.

Once the harvesting season has ended, which will be in late spring/early summer, allow the spears to develop naturally. They will grow 4' to 6' feet high, with lacy, light-green foliage. Keep the bed weeded, mulched and watered. The healthier the fronds, the more energy the plants will have for next year's harvest. When fall arrives, the fronds will turn yellow. At this time, it's generally best to cut the fronds about an inch above ground level and remove them from the area. This will help keep pests, such as the asparagus beetle, from overwintering. It will also make sure your bed is neat and ready to go next spring.

Twenty-five asparagus plants will yield more than enough for a family of four. 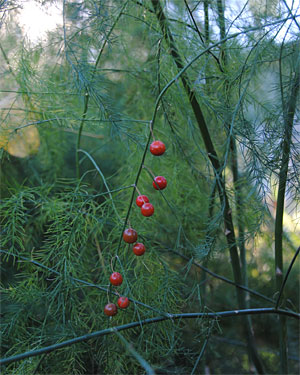 Asparagus foliage and berries. Photo: Sandra Gray, Richfield, MN
Back to Olle Garden Knowledge Base
Use left/right arrows to navigate the slideshow or swipe left/right if using a mobile device